Celebrating a Milestone at the Flynn 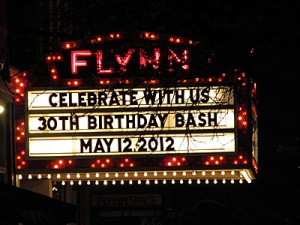 Last weekend, I traveled up to Burlington, Vermont, to help celebrate the 30th anniversary of the Flynn Center for the Performing Arts. This historic art deco theatre in the middle of downtown Burlington first opened in 1930 as a vaudeville hall, later became a movie theatre, and then in 1982 re-opened as a full-fledged performing arts center.

In addition to presenting a wide range of performances – including Broadway, jazz, theater, dance, acoustic music, world music, and family shows – the Flynn is also a venue for concerts by touring rock and pop musicians, the Vermont Symphony Orchestra, and theater companies Lyric Theatre and Vermont Stage. And they also offer educational workshops for all ages through the FlynnArts program and a series of student matinee performances for schoolchildren.

My involvement with the Flynn dates back to the fall of 1988, shortly after I moved to Burlington, when I became a Flynn “Spirit” (ie. usher) and then later a House Captain. In 1992, I joined the Marketing Department (which went from one person to two) and worked at the Flynn for 10 years before moving to Rochester. There I honed my skills as a writer, editor, and proofreader; had a chance to do graphic design; and learned a lot about the performing arts and working for a non-profit organization.

I have many fond memories of my time at the Flynn – getting to see amazing performances in a wide range of art forms, and also having the opportunity to write about them for press releases and brochures. That includes spectacular dance performances by top companies (Mark Morris, Bill T. Jones, Trisha Brown, Merce Cunningham, Elizabeth Streb), avant guard and straight-ahead jazz (Bill Frisell, John McLaughlin and Zakir Hussain, Tito Puente, and Sun Ra are some of the memorable ones), touring Broadway musicals, puppet theatre and spoken word, also performers like Marcel Marceau, Stephane Grappelli, and Mandy Patinkin. I even had the chance to meet some of them. 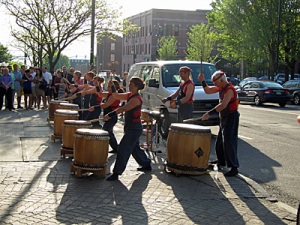 The Flynn is the first place I ever saw Taiko drumming (pictured here are the Burlington Taiko drummers who kicked off last Saturday’s celebration in front of the theatre), and the first place I ever heard Tuvan throat singing. One of the more unusual performance pieces was the duo Eiko and Koma who danced in the Winooski River one summer. And I was there when Ben & Jerry’s launched the flavor Phish Food with a concert by the band Phish.

Then there were the annual New Year’s Eve “First Night” celebrations, with performances from noon to midnight, and the yearly Discover Jazz Festival. It was even a thrill just to walk through the theatre at the end of the day and see the ghost light on the stage, which seemed a little bit like banking a fire for the night. 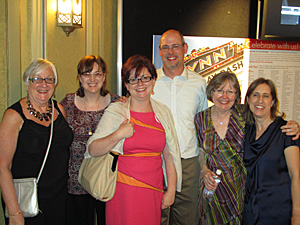 I think one of the things that made the Flynn a success is a very clear sense of mission, and everyone on staff understood how they fit into that picture and worked together as a team. We also had a lot of fun together, with special lunches (and for a time, custom-decorated paper bag hats) to celebrate people’s birthdays.

Here’s looking forward to another 30+ years of great performances!

This entry was posted in Synchronicity: Musings on Words, Music, and the Arts. Bookmark the permalink.